Visited this large impressive 5 star hotel on a very hot bank holiday Monday with my hubby. I can always tell a high class hotel by the toilets....they had Elemis hand wash and cream along with soft white flannels to dry hands. We had been here previously for a meal which was nice so decided to try the afternoon tea as got a good offer. You should know me by now , never pay full price if I can help it !
After a very hot and sweaty  train ride to Embankment station and short walk we arrived outside this grand and very large hotel. The door was held open for us  by a smartly dressed doorman.

The afternoon tea was served in the lounge room which consisted of different size tables and large velvet armchairs and  sofas. All the tables were nicely set with a little green plant in a glass pot, dainty cup and saucers along with crisp white napkins and silver cutlery. There was also a menu on the table which showed the different options and prices. I had booked the champagne 2 for 1 offer that they were doing on afternoontea.co.uk for £49 till end of August. The table that was reserved for us sat 4 so we had plenty of space. It was by the window which was nice, unfortunately the view was just to the street outside not the Thames.

The waitress asked if we had any allergies and then brought us a glass of champagne each. This was very much welcomed as we were both thirsty. She then asked what hot drinks we would like before returning with the afternoon tea stand which I must say was full to the brim.

There were 6 different sandwiches- crayfish , salmon, cheese, egg, ham and chicken all of which were fresh and tasty. My favourite was the ham in sun blush tomato bread. The scones were very large and we had 2 each plain and raisin, served with a pot of clotted cream and jam. The jam was not the best I have had as more like a jelly than jam which made it harder to spread. I must say after eating the scones we were both feeling rather full.  I have never been one to waste food so after a 10 minute rest I reached for the  red cupcake, it tasted very good followed by the ginger cake (not so good) chocolate tart and lastly lemon cheesecake which was very soft and creamy.
We spent about one and half hours in the lounge eating and drinking but then had to wait about 15 minutes to get the attention of the only waitress that seemed to be serving. My hubby started to get irritated  but I was OK with it as I could see how busy it had become. 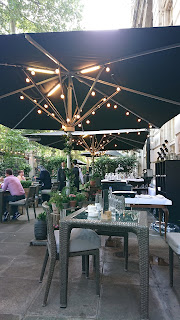 Afterwards we decided to head to the bar terrace for just one last drink before heading to the station. I would recommend going there as it was very nice and called the Secret Herb Garden sponsored by Fever Tree, I had a very nice gin cocktail.


Nearest tube : Embankment   , approx. 6 min walk
Best bits : Relaxing lounge and tasty scones
Worst bits : None to mention
Value for money : Yes I would say so as included glass of Champagne
Would I go back?  : Yes I think I would but not for a while as so many other ones to try !!!!!