I had already purchased a Buyagift voucher for this one and as usual got a great deal, normally it's £59 but I got an extra 23% off so only cost me £45.43! I would highly advise signing up to Buyagift as they will send you special discount codes from time to time which are so worth it.
I phoned up on the Thursday to book for the Saturday as I had heard the weather was not going to be all that great (Saturday turned out OK in end and no rain). What better way to spend a rainy afternoon than getting merry on Prosecco and eating cake whilst sitting in a nice hotel lounge. I told my husband he had to come with me which at first he was not happy about as the England Rugby match was on TV. Thank goodness for  catch up TV !!
First impressions when we arrived outside the hotel was that it was very nice and grand as the doorman greeted us and welcomed us into the lobby.

It was very small inside, and as I looked up I noticed the modern chandelier gleaming above our heads. The Crescent restaurant was directly opposite the lobby entrance and looked very busy. We was shown to our table (only table left) which was tucked away at the back in the corner. As I sat down I noticed how loud it seemed in the room with everyone talking. My husband explained it was because there was no soft furnishing to absorb the sound. I must say the room was not impressive and did not have a relaxed atmosphere.


The waitress handed the menu to us and explained that we had one stand between us and unlimited Prosecco. The menu didn't go into detail what sandwiches or cakes we would be getting just the price and different types of teas. After asking if we had any allergies she brought us over a bottle of Prosecco, poured us a glass each and left the bottle in an ice bucket stand beside our table. Normally with bottomless teas they just come round with bottle and top up your glass.. By leaving the bottle I guess they can monitor how much you have had. Almost 2 bottles in our case !!! 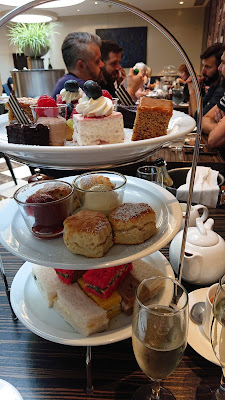 It took just over 30 minutes for the tea stand to arrive. My husband noticed that a couple who were seated after us got theirs before so spoke to the waitress who said it was coming soon. Just then the manager arrived at our table with new bottle of Prosecco and apologised for the delay.
Finally it arrived.....Pretty coloured sandwiches made it a bit different to what I've seen before, as expected they were fresh and tasty. We had 2 scones each, plain and raisin with a generous pot of jam and clotted cream. The cakes looked very delicious but sadly they all seemed to lack in flavour which was disappointing.


Nearest tube : Marble Arch   , approx. 5 min walk
Best bits : Coloured bread sandwiches and warm scones
Worst bits : The room it was served in and the cakes
Value for money : Have had much better for about the same price
Would I go back?  : No - but may have too at some point as brought another voucher for same restaurant by mistake ! Will try to swap for something else as you can with Buyagift