I said I wanted to try the Jasmine Indian afternoon tea at Kona Taj51 after having the Queen of Hearts one there.....and yesterday I did just that and it was even  better than I expected !!!!!!!!!! 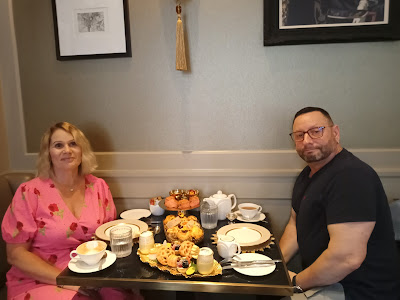 It is priced at £45 each the same as the Queen of Hearts tea but if you buy a voucher from Buyagift when they have a discount you can save up to 25% . This is what i did as always on the look out for bargain and to save money!!!!

I took my husband as i knew my mum would not like the spicy food as she is a very plain food person. My hubby was very impressed with the grandeur of the hotel especially the lovely courtyard garden. 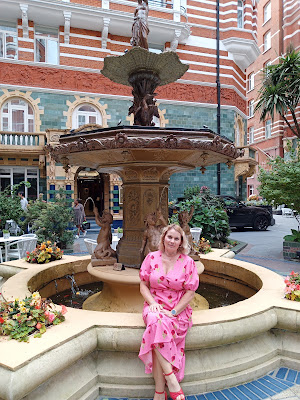 We arrived about 15 minutes early and shown straight to our table for 2 in the corner of the room. We were the first to arrive for the 2pm seating. The table was laid differently to the Queen of Hearts theme tea with lovely gold sun shaped mirror plate charger and the china had gold on to match. 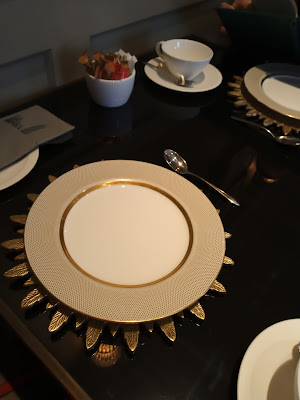 The waitress handed us the menu and asked if we had any allergies. There were lots of different teas to choose from. My husband ordered his tea and I had a cappuccino . The menu sounded amazing

First we was brought a small glass of salty caramel Lassi topped with a toffee crunch stick........it tasted delicious i could of easily had another one. The crunch stick was nice too. 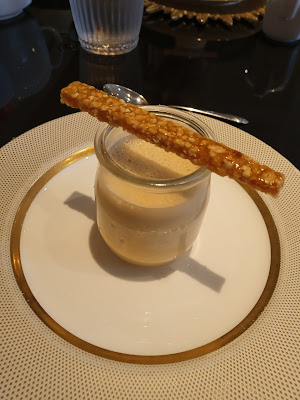 After this the waitress brought out 3 trays of food ......there was so much and it was presented lovely on gold trays and dishes. I could not wait to get stock in 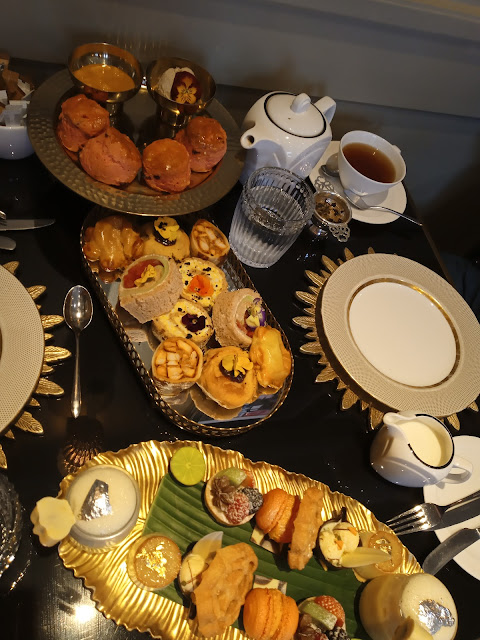 The gold mitrrored tray had the savouries on and they consisted of  Darbari Sandwiches Spiced Creamed Cheese, Kachumbar Pinwheel in Beetroot Bread ,  Curried Egg Mayo Pinwheel in Sun-Dried Tomato Bread, Royal Namkeens Chicken Tikka Wrap, Spiced Paneer Bhurjee Puffs and Spiced Potato Toast with Fig Chutney. The pastry ones were still warm and we both liked the Paneer Bhurjee puff best followed by the Chicken Tikka wrap. All of them were lovely and we were offered more but declined as wanted room for the sweet cakes. 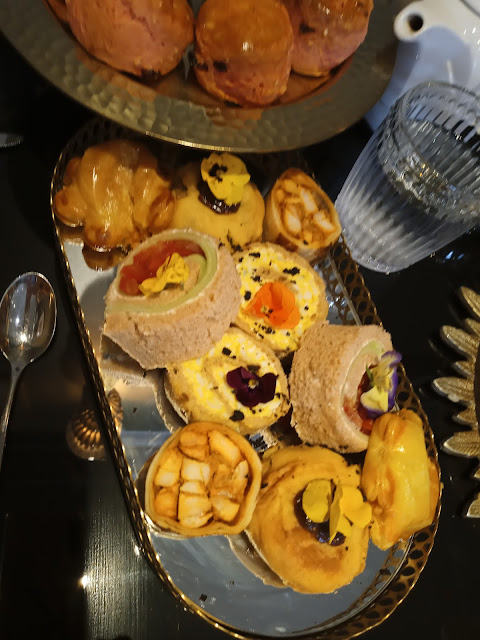 We ordred more hot drinks before tucking into the Meetha Gulabi Scones with Kismis and Almonds, served with Homemade Alphonso Mango Compote, Cinnamon Clotted Cream. The scones were pink in colour and tasted of rose and almond ......so different to the traditional scone and I enjoyed them very much. It was so nice to have mango compote and cinnamon clotted cream rather than just plain jam and cream. 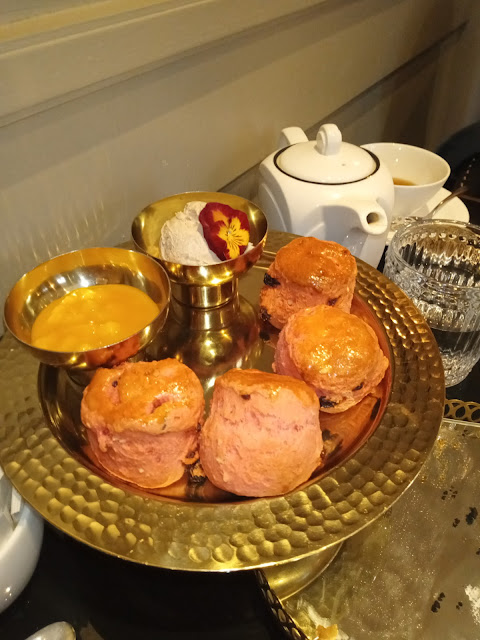 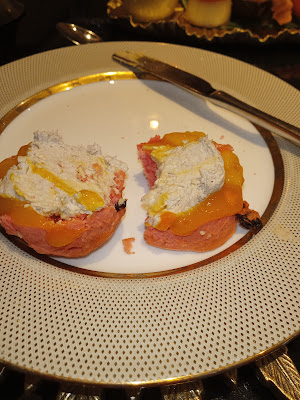 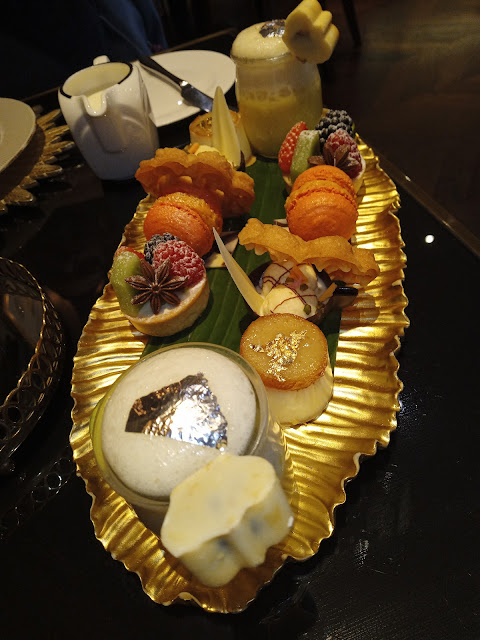 The gold leaf design tray had the following sweet desserts on Gold Leaf Gulab Jamun and Cheesecake ,Gajar Halwa Macaroons,Pistachio, Crusted Fruit and Cardamon Flavoured Srikhand Tart, Short Glasses of Royal Saffron Rice Pudding and Chandni Foam, Chocolate Rasmalai Cups, Anglo Indian Rose de Cookies. The attention to details was amazing, there was a white chocolate truffle chocolate on a stick in the rice pudding and little filled chocolate tea cup plus a lime segment that was made from while chocolate. It looked so life like my husband thought at first it was a real lime. I must also mention the star anise on the fruit tart was made from chocolate too

They were so different to your normal afternoon cakes and I enjoyed them very much. 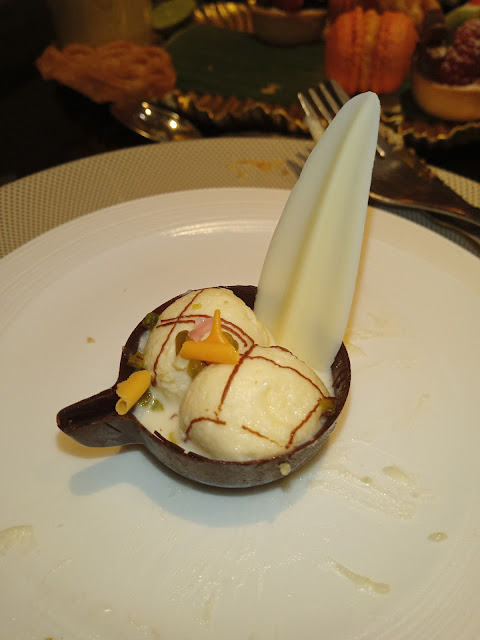 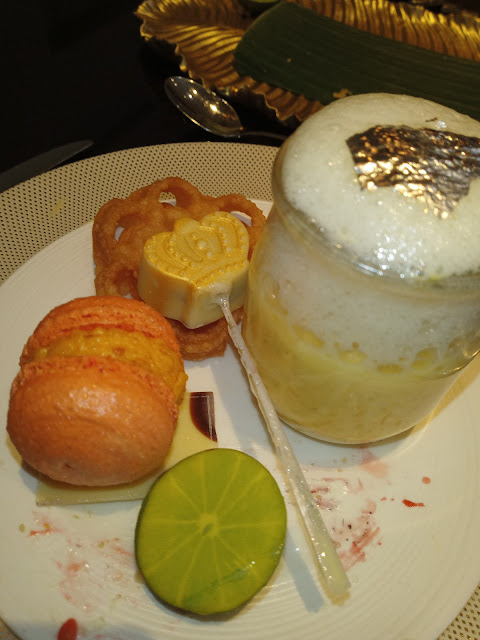 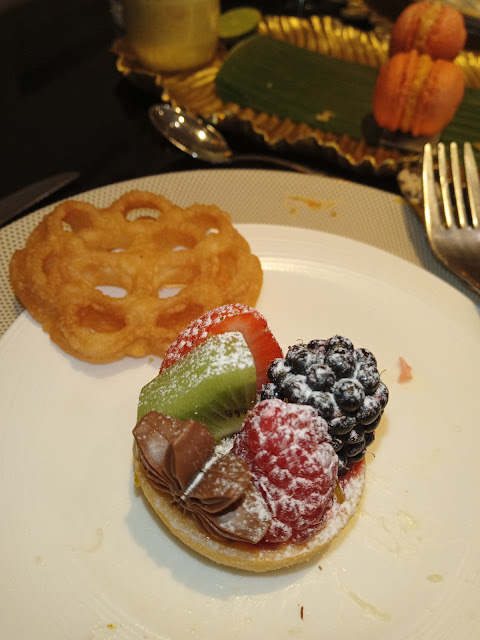 2 hours later and feeling extremely full we happily paid the service charge as the food and service had been excellent . We both enjoyed the whole experience and would defiantly go back. 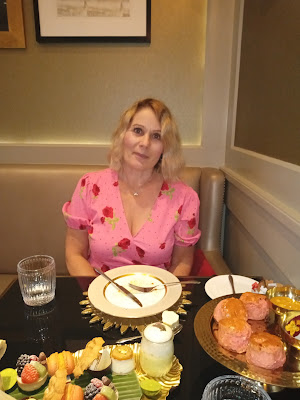 Nearest Station : Victoria station - about 10 minute walk
Best bits : Excellent service and so unique amazing food . Also the amount of food we got for the price.
Worst bits : None
Value for money : Yes defiantly
would I go back? : Yes I would for both types of afternoon tea.

Had a lovely weekend away visiting the Chilford Hall Vineyard in Cambridgeshire. This is the second vineyard we have visited and our plan is to visit a different one each year. We are not wine connoisseurs but maybe after a few more years could be experts!!!!!!! So far we have learnt quite a lot and also spent a lot of money in buying the wines after.

The vineyard tour and tasting lasts 2 hours and cost £25 each which includes an afternoon tea . This i think is very good value as before the tour we got offered complimentary teas and coffees whist waiting for it to start. Out tour guide was extremely informative and we learnt so much about the growing of the vines and the different types of grapes.

After tasting 5 different types of wine the glasses were cleared away and the afternoon tea stand delivered to our table. We were also offered tea or coffee 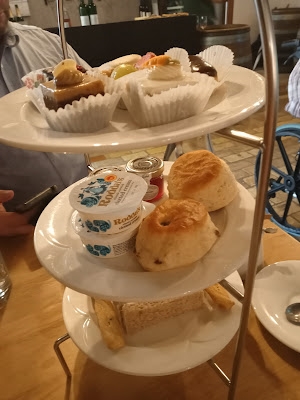 We had to share 4 different finger sandwiches and a cheese straw each , the sandwiches were nice and very fresh. We had one fruit scone each and a pot of jam and pot of clotted cream each. I was disappointed that the scone was not homemade and just from a packet however I still enjoyed it. 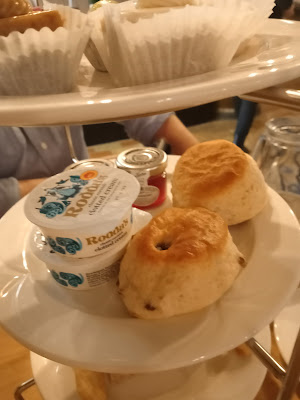 Lastly we tucked into the top plates of mini cakes which were all shop brought rather than homemade.

We cut each one in half and they looked and tasted very nice. 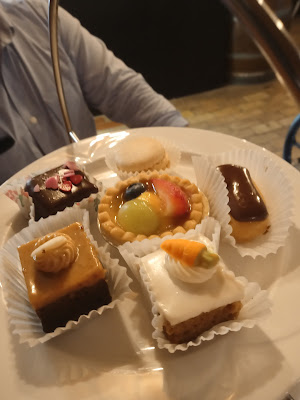 Nearest Station  : Its in the countryside so no stations nearby    Best bits : Mini cakes   Worst bits : Homemade scones would of been much better and perhaps another sandwich each  Value for money : Yes it is at only £25 each with the tour and tasting
Would i go back   :  Yes maybe but there are so many other vineyards to visit 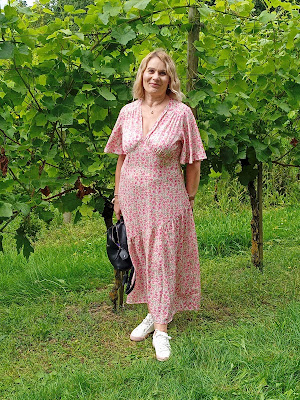 Yesterday I had a lovely afternoon tea with my friend which was much needed , as it had been 4 weeks since my last one !!!!!!

We went to Tewin Bury farm in Hertfordshire which is a hour drive from us. I went here with my mum about a year ago and always said I would go back.

The afternoon tea is served at the Cow Shed restaurant and you can sit outside on the lovely covered terrace. It was very busy outside but luckily when I booked about 3 weeks ago I requested a table on the terrace. 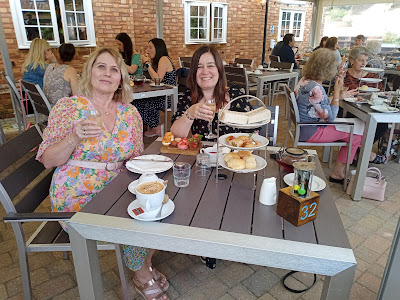 The menu sounded nice and there was a very good selection of teas available. If you do not like tea like me you can have coffee of your choice or hot chocolate. 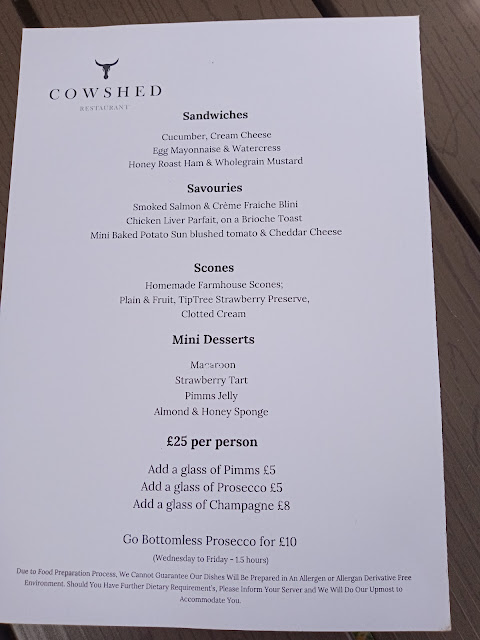 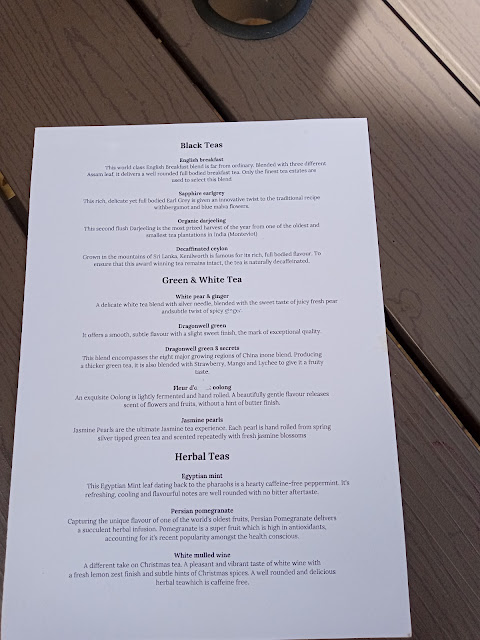 After ordering a glass of Prosecco each which was additional £5 a glass on top of the £25 each for the afternoon tea I informed the waiter i did not eat fish or like chicken liver pate. They were happy to swap this for vegan sausage roll instead. My friend ordered a tea and I ordered a cappuccino . When the pot of tea came out the waiter also brought out a sand timer with 3 differed tubes of coloured sand. Each timer ran for a different time . The yellow sand for 3 minutes , green 4 minutes and black 5 minutes. So you could decide the strength of tea you wanted. 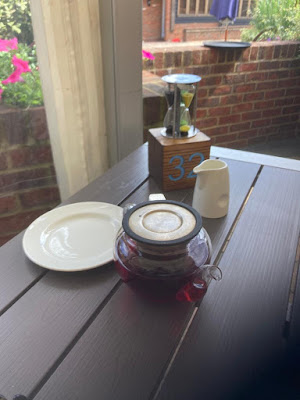 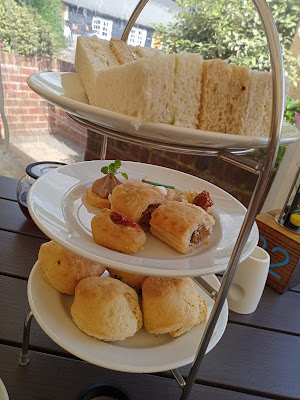 The cakes came out on a separate wooden board.. 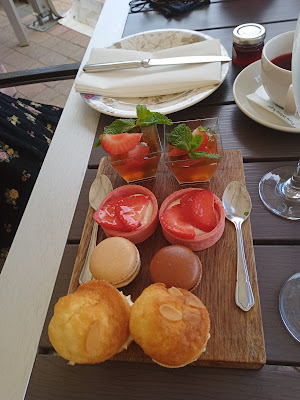 The sandwiches were nice and fresh and we had 3 each plus 3 little savouries each . I am so glad I had the vegan sausage roll as it was my favourite out of the savouries. The little tiny jacket potato was very nice too.

Next we tucked into our favourite part of the afternoon tea .....The scones

We had 2 each , a plain one and fruit one with a pot of Tiptree strawberry jam each and a pot of clotted cream to share. The scones did not disappoint. I remember last time that I wrote that they were one of the best scones I had tasted so far. This is probably still the case

To go with the scones we ordered another hot drink each 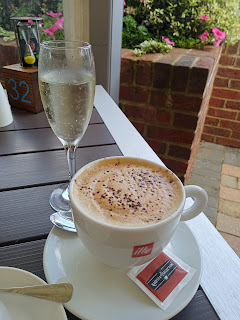 The cakes were nice our favourite was the Almond sponge closely followed by the little strawberry tart.

I did not like the Pimms jelly much as it did not have much flavour.

Nearest Station  : Not sure as I drove , plenty of car parking on site   Best bits : Vegan sausage roll and  the homemade scones    Worst bits : None really it was all very good  but if I want to be picky I could say the Pimms jelly Value for money : Yes it is at only £25 each
Would i go back   :  Yes for a third time !!! 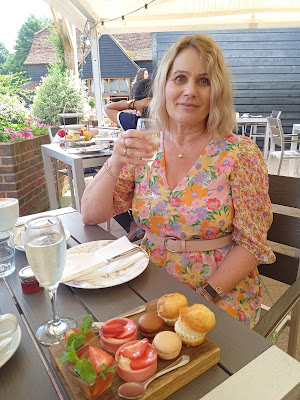 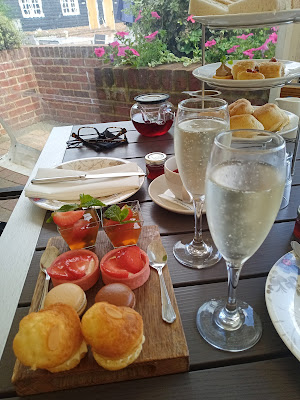