Peter Rabbit™ Afternoon Tea At The Terrace On Piccadilly

I decided to treat my lovely daughter to this afternoon tea and Spa at the hotel Le Meridien Piccadilly so we could spend some time together since she recently moved out. It has only been 7 days and I miss her already! We both had to take the day off work as the wowcher offer was only valid weekdays but that didn't matter.
https://www.wowcher.co.uk/deal/london/11361938/5-meridien-afternoon-tea-spa-2?usr_src=search . It cost £59 for both of us including entry to the hotel spa .

First impressions, as we were led into the glass roof atrium situated on the roof terrace was, 'WOW this should be good'. Sitting high above Piccadilly the glass atrium filled the room with natural light creating an oasis of calm along with the greenery.
I noticed there was a small balcony outside that you could sit on but as my daughter does not like risking insects buzzing around her she preferred to sit inside. Personally I love sitting outside - we need to make the most out of the British summer since it does not last very long !

Unfortunately this afternoon tea did not include a glass of bubbly so I just had a boring glass of tap water and then coffee instead of tea . My daughter ordered a glass of Diet Coke which was extra charge and then a herbal tea. 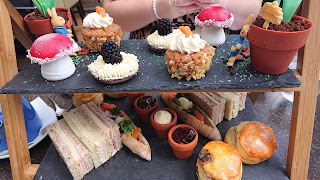 After asking if we had any allergies  and us declining, they brought us out the most beautiful stand of food as shown opposite. I was well impressed on looks alone and my mouth had already started salivating even before tasting any of the goodies.

The waitress started to explain what was on the stand but all I could think of was the cute flower pot and Peter Rabbit which were completely edible ! Below is the menu we had

My favourite sandwich was the devilled eggs on basil bread, we both found the ham and cheese on granary bread to be a bit dry.  Scones were OK but nothing special , have had better . Now to the patisseries; I loved the blackberry macaroon as it was very moreish and the  carrot cake was nice with a hint of spice and creamy sweet topping. I do love a carrot cake. My daughter on the other hand is very fussy and does not like cakes with fruit in so it meant I got to eat hers too. Now the flower pot which looked better than it tasted was made out of painted chocolate with a chamomile mousse inside and a chocolate cake base with blackberry sauce. All I can say is that the mousse had a very unusual taste which I found OK but my fussy daughter definitely did not like. Unfortunately I could not eat hers too as by then was full up .

When we finished we asked for the bill and I was shocked to find that they had charged me £5.50 for the additional black coffee. When I queried this and waitress said that the first coffee was included but any additional would be charged . I have been to many afternoon teas and have never been charged extra for a second cup of coffee and certainly not £5.50 for a small black coffee! If in Harrods maybe -  but they only charge £5 in their cafe! Anyway we were just wanting to go to the hotel spa and relax, so we did not bother to argue and just paid for the extra plus 12.5% service charge - well my daughter did anyway.

Now talking about the relaxing spa ..do not even bother to go there. The pool was cold and they only had a steam room which had a awful aroma - nothing relaxing about it one bit. So not worth getting changed for in our opinion.

Nearest tube :Piccadilly Circus  , approx. 7 min walk
Best bits : The Peter Rabbit theme was cute and very different, lovely room light and airy
Worst bits : The charge of £5.50 for second cup of black coffee
Value for money : OK considering the unusual theme as very different
Would I go back : Not sure , I would not rush to go back but never say never !
at August 16, 2019