I am a great believer in supporting local shops so as a pre birthday treat booked an afternoon tea with my mum and friends at a local coffee shop. Unfortunately it was rather disappointing as we was expecting some homemade cakes or scones. Instead we got supermarket loaf cakes sliced up.

I hate to give a negative review but want to be truthful as that is the whole reason for doing my blog. True honest personal reviews and unedited  photos. Do not get me wrong the sandwiches were OK and there was plenty of food on the plates so not completely bad

I booked the afternoon tea a week in advance and was informed it would cost £16 each and we could have our own  little room at the back of the cafe. This sounded perfect as there was 4 of us plus my friends two young grandchildren. I mentioned that none of us eat fish and we wanted coffee instead of tea. 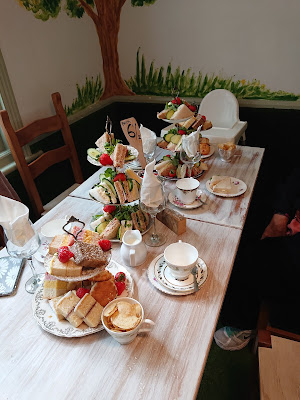 When we arrived our table in the back room  was already laid out with the cake and sandwich stands. They were piled high with sandwiches garnished with cucumber slices and rocket leaves. The cakes stand had fresh strawberries on which was nice and dusted with icing sugar. 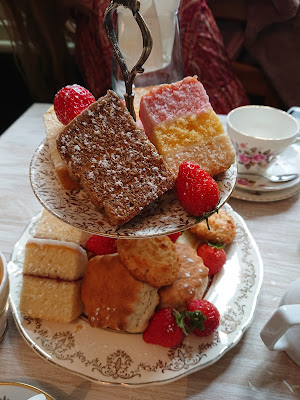 We got a large pot of coffee which just tasted like instant coffee plus a jug of milk so we could help ourselves. Unfortunately we did not get a choice of coffee as a cappuccino would of been nice instead We also got a jug of water and some homemade lemonade in a jug. I did not have this but my friend said it tasted nice.

We had three different types of sandwiches consisting of egg mayonnaise plus she did a special plain egg one for my mum . There was also plain cheese and a smoked ham sandwiches. They were nice and fresh but just a bit boring ......some pickle or tomato inside them would of been nicer.

For the cakes we had a plain shop brought scone each and individual dishes or cream and jam each. The scones was not that nice as just tasted like a cheap basic shop one. As you know scones are my favourite part and to not have a fruit one was disappointing. We also got a coconut macaroon each. The cakes were just slices of shop brought loaf cakes which were all pretty similar in taste !!!!!!!!!!!!  Madeira lemon , coffee, plain madeira and angel cake.......No variety. 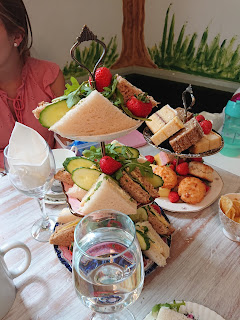 Ok i get if that some cafes may not have the resources to offer homemade cakes however I noticed when paying that they did have some lovely looking homemade type cakes on  the counter. It would of been nice with the afternoon tea to have had more variety of cakes such as a chocolate one like a brownie or millionaires slice and some pretty coloured macaroons would of been nice too. I know you can get these in most shops as I had all the above when I did my own afternoon tea at home for Mothers Day.

There is no excuse as i gave a weeks notice  so there was plenty of time to prepare it.

I think Helen's cafe have let itself down of the afternoon tea as i will not be coming back for one in the near future. 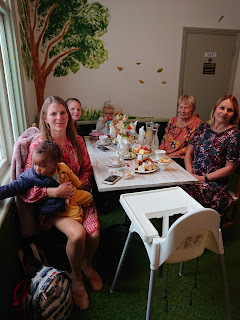 Best bits : Having the back room to ourselves and the fresh strawberries
Worst bits : Lack of variety and fact that it was all shop brought cakes and scones
Value for money : No for a local cafe it was expensive and defiantly not worth £16 each for what we got
would I go back?  :  No  I would not    sorry Helen
at October 11, 2020