Wednesday 5th August
Lovely afternoon tea with my mum
This is my second afternoon tea since lockdown and it did not disappoint !!!!!  I got it as a voucher last year from Buyagift priced at £38 for 2 but i got it when they had a discount code so paid about £24 for 2 of us. I noticed that the price printed on the menu was £25 per person so i got a extremly good deal .
Tewin Bury farm was originally a dairy farm and now after selling the cows in 1980 and purchasing some farmland the Williams family decide to open it  up a hotel incorparatig many of the original buildings. The grounds and gardens are lovely and they hosts many weddings there.
There are two places to eat . One is a more causal resturant/cafe which is joined to the farm shop with plently of outside seating and the second resturant is  called Cowshed and used to be the shed were the cattle were kept. You would never of known that as now its a very nicely decorated resturant with an outdoor terrace. This is where we sat for our afternoon tea as it was a lovely sunny day but not too hot as the tables are  under a big canapy. 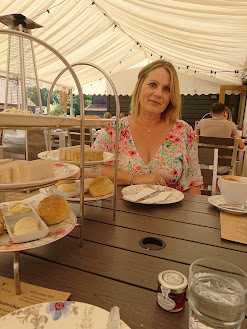 The table was nicely set with a plate and matching cup and saucer. My mum noticed that they were by Villeroy & Boch ....very posh for a farm and more like something you would get in a top London hotel.
The menu sounded nice and we both explained to the waitress that neither of us eat fish and my mum does not like mayonaise or mustard . She was happy to swap them for us and make the ham sandwhich without the mustard. We both ordered a cappucino each and asked for a glass of tap water. 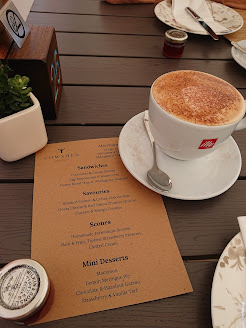 The coffees arrived shortly followed by the cake stand ......We had a cake stand EACH full of lovely food and 2 large scones each ......Wow we was both very impressed.
On the top plate i had 2 mini goats cheese and onion mini tarts which tasted deliouous plus a little chcken crotstini . The middle plate had 3 sandwiches on which were nice but the bread had gone a bit dry on the outside. Next came the scones which were the best we had ever tasted. They were not warm. but definatly homemade ...crunchy on the outside yet soft and fluffy on the inside. To go with them we each had a pot of Tiptree strawberry jam and plently of clotted cream.....YUM. 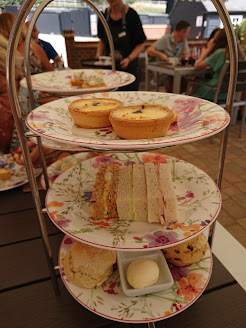 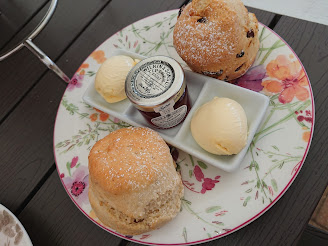 After eating both scones i was starting to feel full but still had a bit of room left for the cakes that followed. We both ordered an Americano coffee each. The cakes were served on a wooden board and we both had 4 each .  I liked the caramel flavour macaroon and Lemon merainge tart best . All of them were nice and we managed to eat them all.
When it was time leave i asked if there was anything to pay but the waitress said  no extra charges to pay as all hot drinks were included in the voucher. 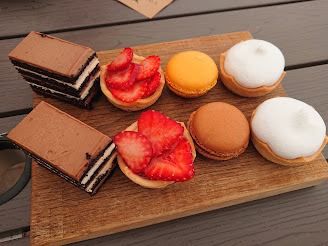 Nearest Station  : Not sure as i drove , plenty of car parking on site   Best bits : Definatly the goats cheese and onion tart plus the homemade scones    Worst bits : None really it was all very good   Value for money : Yes defo for what i paid . I think considering how nice it was £25 per person is still a good price .
would I go back?  :  Yes
at August 06, 2020