Yesterday I went for an afternoon tea with my hubby that I booked online a few weeks ago using Groupon voucher for tea at the Grand Court Paddington hotel.  I decided to book this as I had already booked another voucher deal at the Skylark roof gardens for cocktails and platter at 5pm and thought we could make an afternoon of it.  Basically it all went a bit wrong.....

About a week before yesterday the Skylark contacted me to inform me  that the  roof garden was unable to open and that they could reserve us a table at Hucksters bar downstairs on the terrace and honor the voucher. We were a bit disappointed as it did not look as nice but as had already planned the afternoon tea so decided to still go ahead.

We arrived outside the hotel Grand park Paddington Court only to find the doors closed and a sign stating that the hotel was closed until further notice due to outbreak of covid. There was also a note on door,  that if you had a room booked you would be upgraded to the 5 star Chilworth hotel and there was a phone number to contact them. A few phones calls later and waiting to be transferred to various people I finally spoke to the restaurant manager at the Chilworth who said that they could offer us the afternoon tea there. This was such a relief after traveling on 3 different  hot underground trains to get there.  It was only a 8 minute walk away and from the outside looked quite impressive. However when walking into reception it changed. It was very small inside more like the reception of an apartment block and the restaurant was very small.

The manager greeted us and showed us to our small table by the window. Upon sitting down i noticed the fabric on the chairs was dirty and grubby looking !!!!There was only one other table occupied and they were having an afternoon tea too. I handed over the voucher and explained I had booked the traditional afternoon tea and not the Indian themed one. Not a good move as the Indian one would if been better I think as they had to scrape around in the kitchen to find food that was suitable!!

The waiter  brought out a bottle of prosecco which was included in the voucher but I had to ask for a ice bucket to put it in otherwise it would of just been left on the table and not cold. 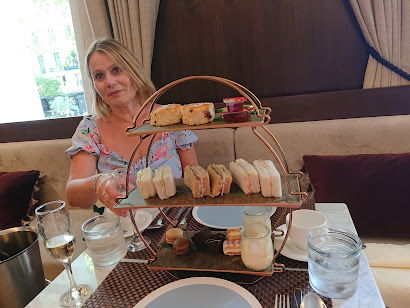 About 10 minutes later the tea stand arrived which looked disappointing.  There were 2 shop brought scones on top with individual butter and jam but No clotted cream. Then in middle tray 3 finger sandwiches each.... Salmon, ham and cucumber. Then at bottom 3 little shop brought cakes and pot of Panna cotta. I asked the waiter if there was any cream to go with the scones and he said NO and they had tried the local shop but they did not have any. Scones are not the same without the cream!! He did then bring us each a pot of strawberry, meringue and runny sauce which was like a very sweet custard. The sandwichs were tasty and fresh but the rest was disappointing and not what we had expected to get. 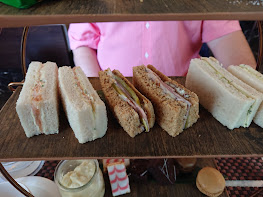 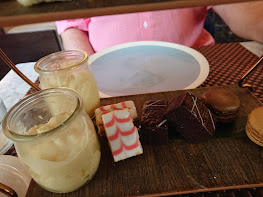 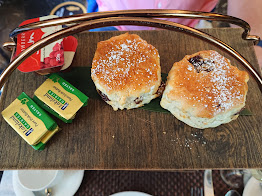 I guess it was not the Chilworth hotels fault as they did their  best at short notice to accommodate us. However this  afternoon tea was not up to the standards you would expect from a London hotel.

Never mind it was what it was and the cocktails later made up for it. I have since complained to Groupon and they have issued me with a credit. 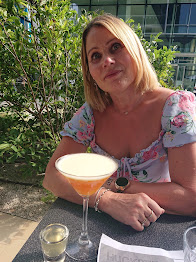 Nearest Station  : Lancaster Gate or Paddington , about 8 minute walk from there.  Best bits : That they were able to offer  us something at short notice.   Worst bits :  NO cream for scones which were very dry. Disappointing cakes.   Value for money : Even with Groupon voucher not really .
would I go back?  :  No defiantly not
at August 10, 2020