Simple to make and melt in the mouth 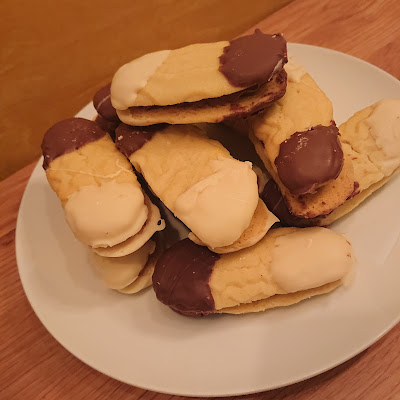 
Heat oven to 180C/160C fan/gas 4 and line 2 baking sheets with baking parchment. Put the butter and sugar in a large bowl and beat with an electric hand whisk for about 5 mins until pale and fluffy. Add the vanilla extract and beat again until fully incorporated.
STEP 2


Sift in the flour, cornflour and baking powder, and fold into the mixture using a spatula until combined (the dough should have a tacky consistency). Spoon the dough into a piping bag fitted with a large star-shaped nozzle. If all the mixture doesn’t fit, do it in 2 batches.
STEP 3


Pipe 10cm long, 1.5cm wide fingers onto the baking sheets, making sure there are 3cm spaces between each finger. Bake for 8-10 mins, swapping the trays over halfway through the cooking time, until pale golden and cooked through. Leave to cool on the baking sheets for a few mins, then transfer to wire racks.
STEP 4


Melt the chocolate separately over a pan of gently simmering water (making sure that the bottom of the bowl doesn’t touch the water) or in the microwave in short bursts, stirring every 15 secs or so. Dip 1 end of the shortbread fingers into the bowl of milk chocolate and the other end in the white chocolate. Leave to set on baking parchment before filling


Mix the butter , cocoa powder and icing sugar until light and fluffy . Put into a piping bag as pipe along one biscuit making sure the chocolate is on the outside Sandwich the two halves together
at March 06, 2021