There are so many available at the moment but i choose the one at Kona which is a restaurant at the lovely Taj 51 hotel. I have been here twice before so knew it would be a good one

I managed to get it cheaper by getting a Buyagift voucher when they offered a discount code . I paid £148.20 for two of us with a bottle of Bollinger which is still expensive but better than the menu price of £190 for two.  I try not to pay full price for anything unless i have too!!!!!!!! 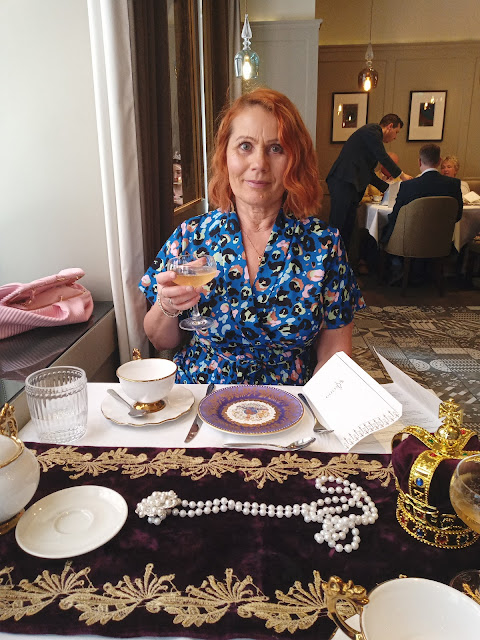 When we arrived is was extremely busy and we had a nice table by the window. The table was decorated with a gold crown and the plate was a special Jubilee plate. There was also a string of pearls and brooch on the table for decoration. On the window ledge next to me was a book to celebrate the Queens Jubilee which was full of lovely pictures. The whole table theme was very well thought out and executed. 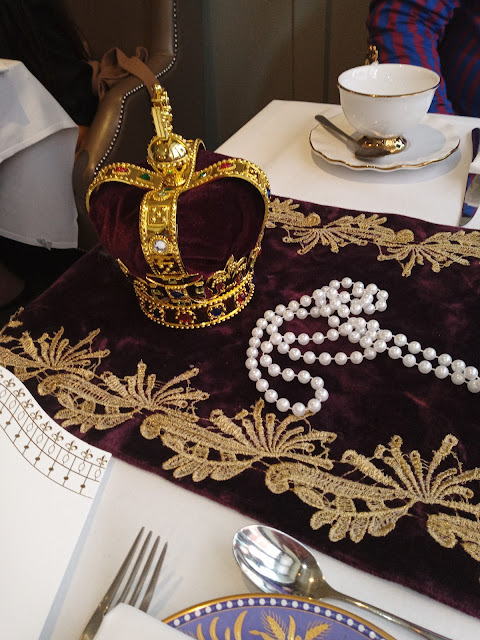 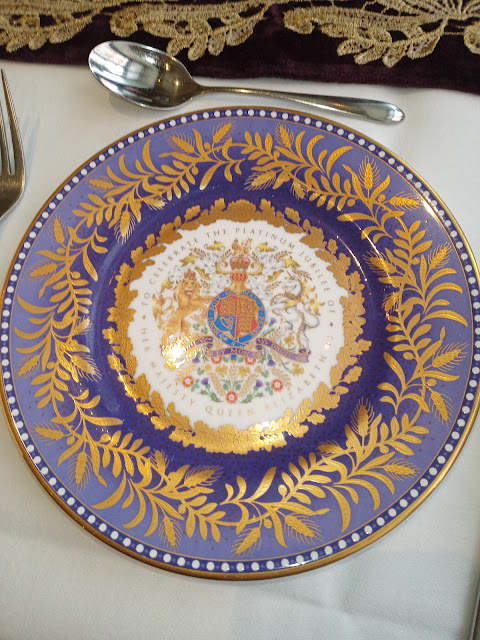 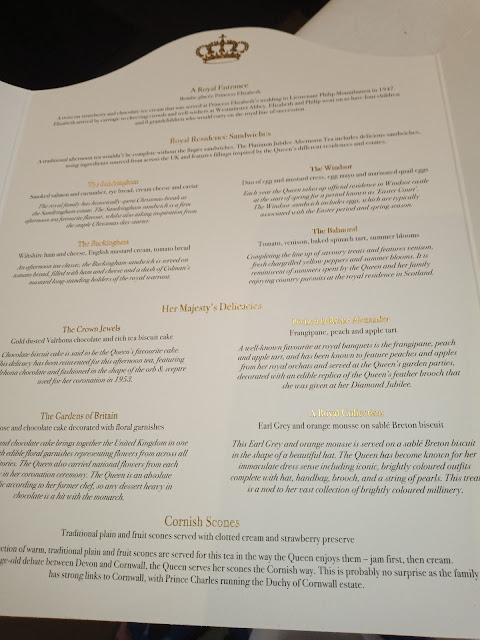 We waited about 10 minutes before the waiter came over and offered us our first glass of Bollinger along with tea of coffee. He also asked if we had any allergies so I just  mentioned that I do not eat fish.

There were two special Jubilee  teas recommended on the menu and my hubby choose the Regal one which was Earl Grey with hints of bergamot and blue flowers . He said was very nice. I just ordered a cappuccino. 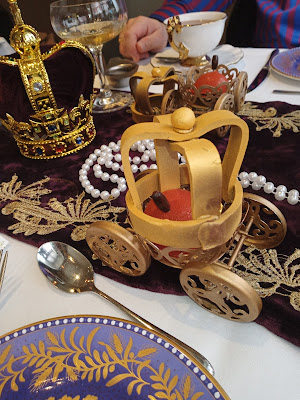 Shortly after a waitress gave us a little gold bell and said that if we ring it we will get a surprise......it was just a bit of a gimmick but fun. I rang the bell and two little gold carriages were brought out and placed on our table. They contained a strawberry and chocolate small ice cream bomb that was represented the ice cream served at the Queens wedding. 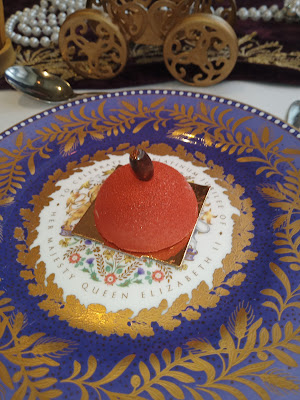 Once we had finished this and our glass topped up with Bollinger the afternoon tea stand arrived. 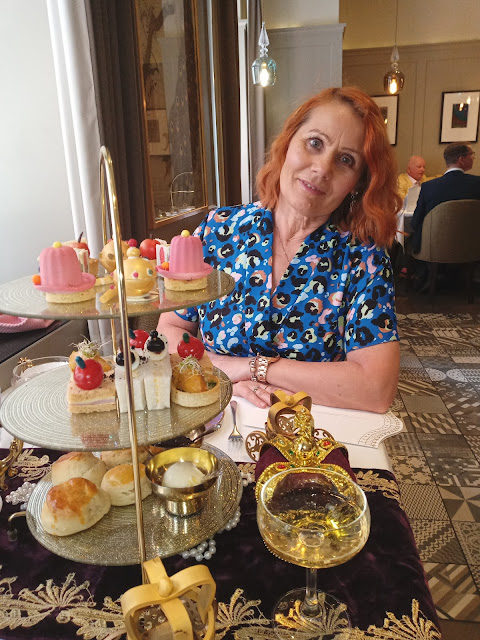 It all looked very nice

The middle plate contained the sandwiches of which we got four each plus my hubby got an extra salmon one and I got an extra ham and cheese one instead of salmon.

Each sandwich was named after a Royal residence......my favorite was the Buckingham which was cheese and ham and my hubby liked the Sandringham which was the Salmon one. The Windsor one was nice too as full of creamy egg mayonnaise. All of them were fresh and tasty and we asked for an extra one each which the waiter brought out to us. 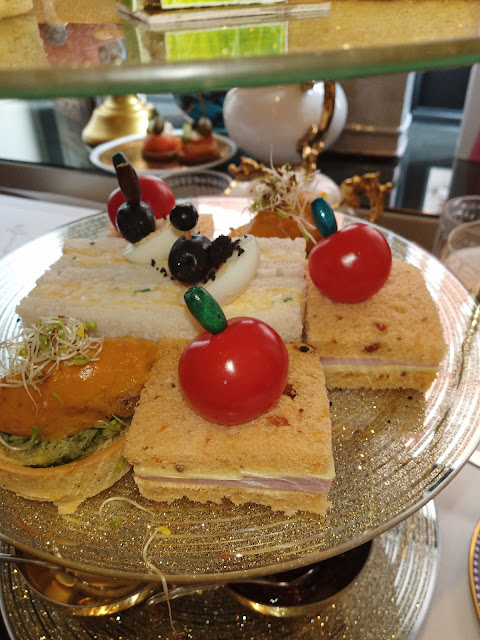 Next we had the scones which were still slightly warm. We got a fruit one each and plain one with silver pot of jam and clotted cream. My husband does his different to me and puts the cream on first whilst i always think jam first then cream on the top is the proper way to do it. 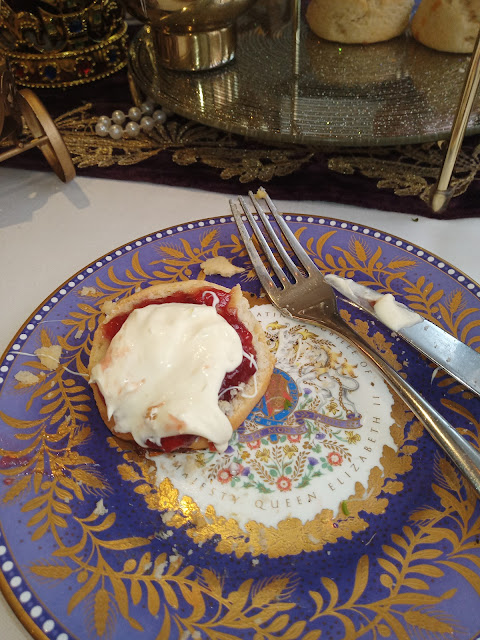 More Bollinger was poured and I ordered another coffee to go with the amazing looking cakes. 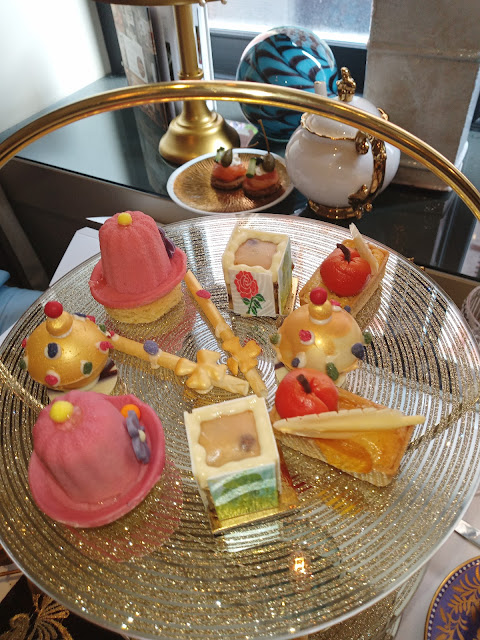 There were four cakes each and they all look amazing. 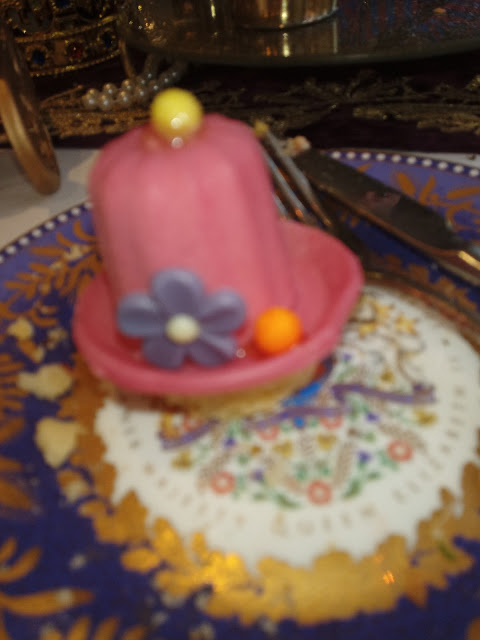 A Royal Collection Earl Grey and orange mousse on sablé Breton biscuit. This had very subtle flavors with creamy mouse on crunchy biscuit base. It tasted very nice. 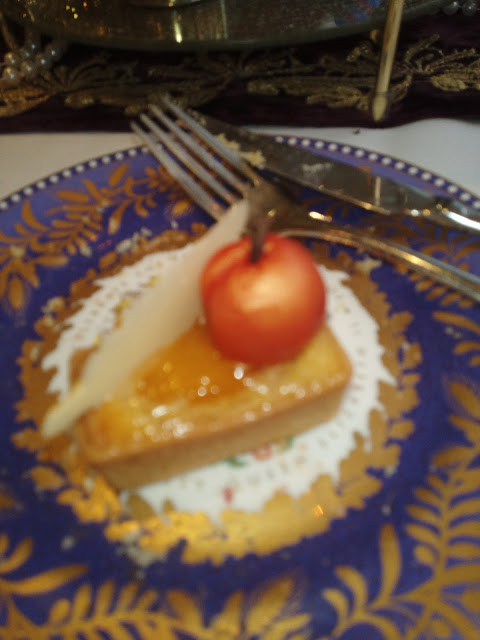 Pêche à la Reine Alexandra Frangipane, peach and apple tart was my second favorite as I love this combination. The apple was made out of marzipan with chocolate stalk on top. 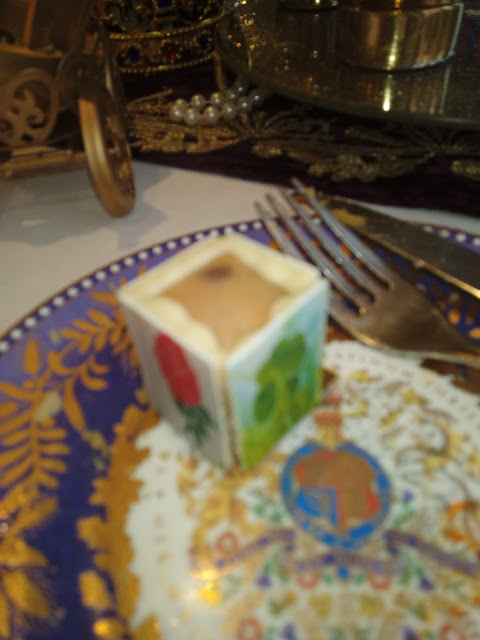 The Gardens of Britain Rose and chocolate cake decorated with floral garnishes was very clever as each side of the square had a different flower printed on white chocolate. A rose for England, daffodil for Wales, Thistle for Scotland and clover for Ireland. 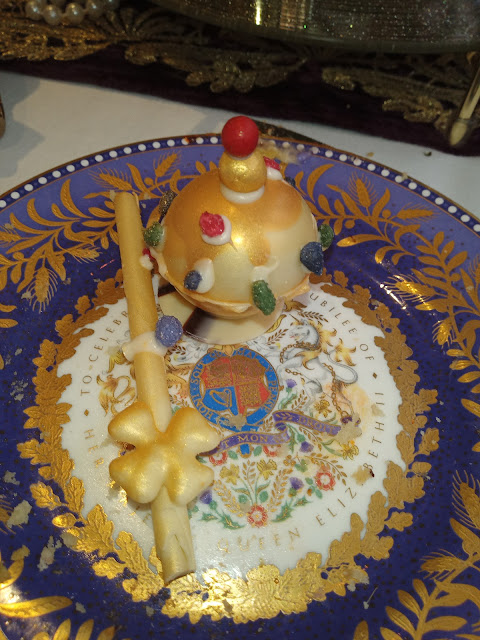 The Crown Jewels Gold dusted Valrhona chocolate and rich tea biscuit cake. The work on this chocolate sphere was very clever and inside was a rich chocolate ganache in the shape of a rose .

This was my favorite cake 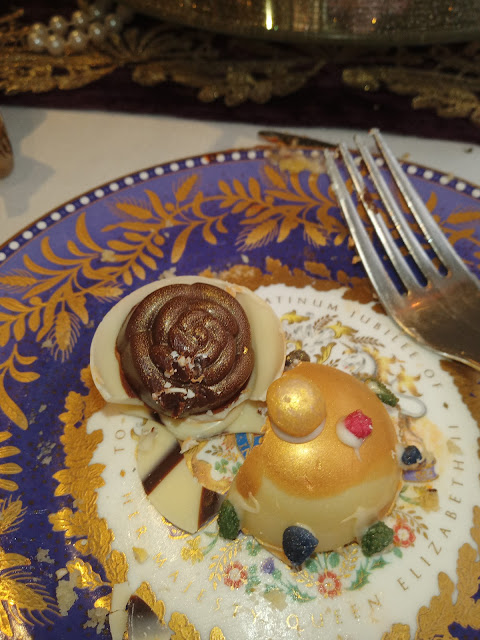 This afternoon tea was a lovely celebration of our Queen and we both enjoyed it. 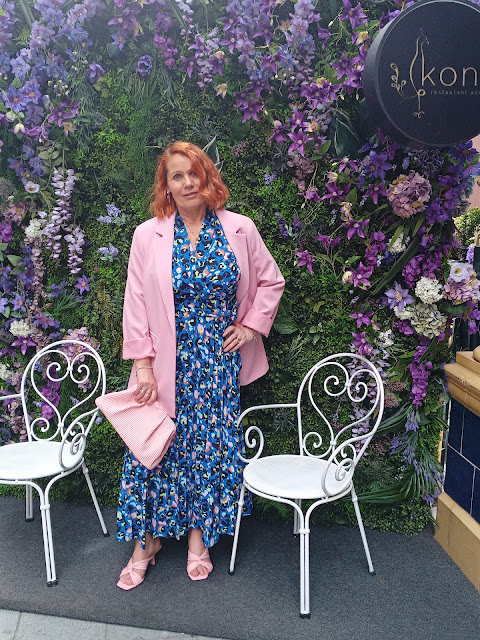 Nearest Station :        Victoria underground  - about 15 minute walk
Best bits : The table decorations and themed cakes plus the Bollinger
Worst bits :  None really but maybe they could of asked us if we wanted any more food rather than us having to ask them
Value for money : It was expensive but we did enjoy it .
would I go back? :  Yes I will once they do a different theme.
at June 04, 2022