Yesterday I treated my mum to an afternoon tea for her birthday. As neither of us had been here before and as it was a special occasion I choose to take my mum to Cafe Royal as had been told it was a very nice. The afternoon tea had a Van Gough theme to it.

It is priced at £65 each so not cheap therefore I was expecting it to be very good which luckily it was !!!!! 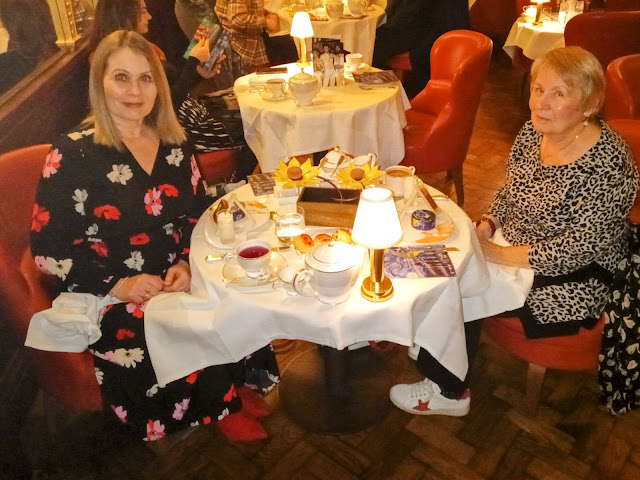 Upon walking in,  the lobby was modern looking which I thought was strange as an old hotel . In the middle of the lobby area was a round table with lots of tall glass vases filled with fresh flowers. The table sat under a very long modern light that hung above it. 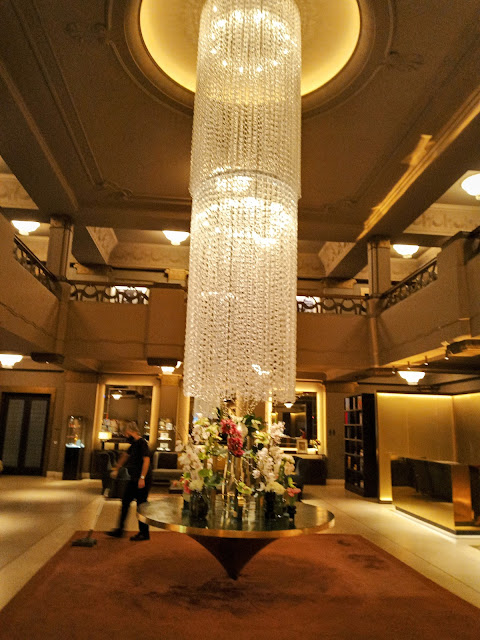 We was shown the way to the Oscar Wilde room where the afternoon tea is served.

Wow this room was in no way modern but instead very traditional and I think not changed much since it opened in 1865. It was named Oscar Wilde room  in honor of their most famous patron to dine there.

The room is heavily gilded in gold with a high ceiling with paintings on. As I walked in my first impression was how dark it was but at the same time how beautiful it was. My mum said that  back in the eighteenth century rooms were dark as lit by candles. There was a man playing a piano in the middle of the long room which had lots of low dark wood tables covered in crisp white tablecloth  with red low chairs around. 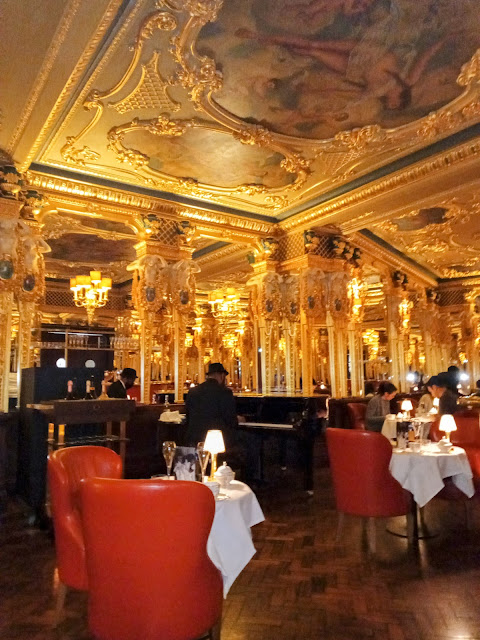 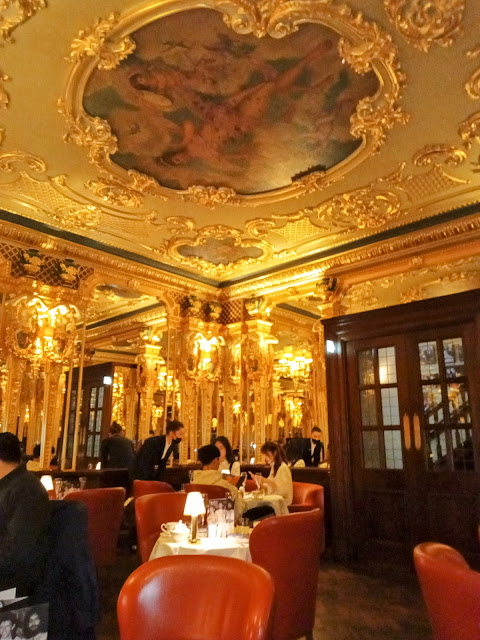 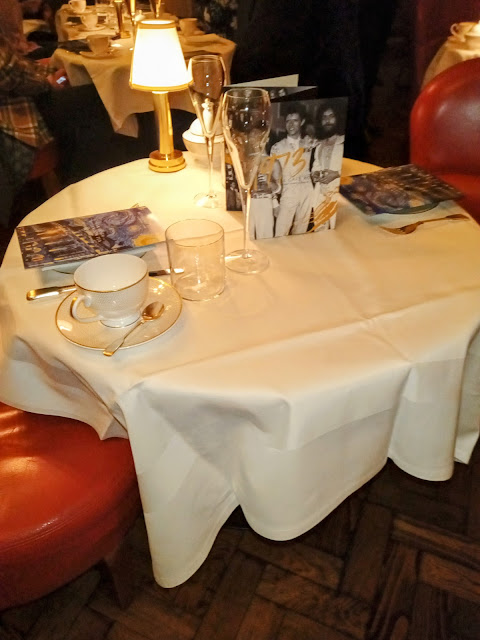 On our table was a menu which was of high quality and contained many pages. It gave information on Van Gough and how the food resembled his paintings. It also listed all the teas available and there were quite a few..... 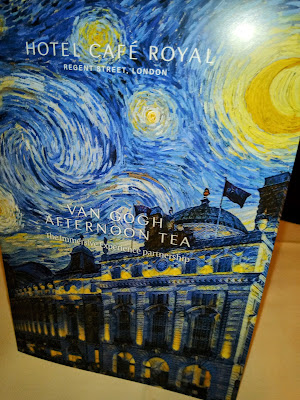 https://806d2bf04cf5fa54997a-e7c5344b3b84eec5da7b51276407b19c.ssl.cf1.rackcdn.com/u/A5_VG_MENU_STANDARD_200721.pdf
As you may know I am not a tea drinker but  do not mind the fruity herbal ones sometimes. The waiter recommend the Starry Night tea which I decided try. So glad I did as it was nothing like tea but fruity and sweet. It was blue in color when poured from the teapot but changed to a deep pink purple color once you added the lemon juice in the jug. Bit of a gimmick but very clever and as they say ' little things please little minds' 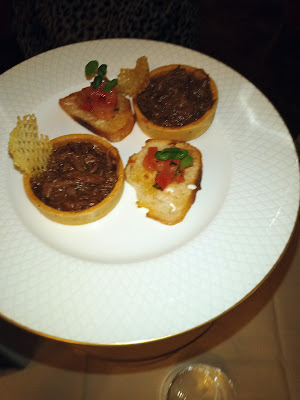 The tea stand arrived with two plates of sandwiches and a plate of little savories on the top. These were a tiny crispy slice of bread with chopped tomatoes on  plus we got a small pastry tart each filled with tender rich roasted lamb. It was delicious and so much flavor in the lamb.
We got four sandwiches each in different types of bread. They were extremely fresh and very nice. I think the chicken one was nicest and you could taste the lemon in it. 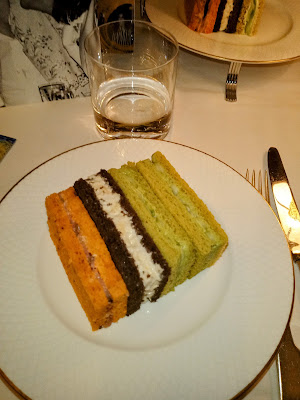 Once we had finished these sandwiches we were offered more but decided not too as wanted room for the cakes. We did however order more hot drinks and I had a coffee this time.
The cakes and scones arrived together .......they were pieces of art in themselves and each one represented a painting by Van Gough 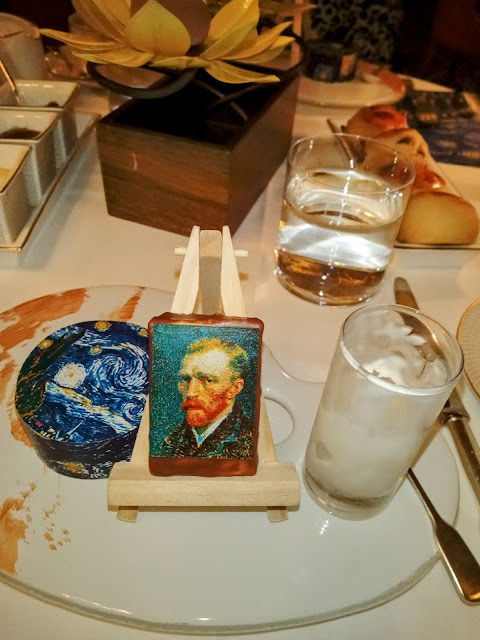 The waiter explained each item and the order we should eat them in.
Starting with the lemon ice cream which was served in a shot glass. This should of been made to look like a paintbrush according to the menu . Maybe it melts too quickly that way !!!!!
This was so creamy in texture with just the right amount of lemon.....very nice and my mum liked this best of all.
Next we eat tucked into the blue dessert called The Starry night . Its amazing how they got the painted effect on the chocolate . Once you crack open the chocolate shell you get a soft light creamy filling with a orange flavor. I really enjoyed eating this one as so creamy yet light and not too sickly.
The self portrait was next to eat and this was like a chocolate crunchy pecan cake square with coffee mouse. This was very nice too. The final cake before the scones was the chocolate dome shape inside the metal sunflower stand. This represented the painting called 'Vase with Twelve Sunflowers' however we only got two sunflowers !!!!!. This cake was very chocolaty and you could taste the salted caramel .
I was impressed with all the cakes as not only did they look fantastic but they tasted lovely too. 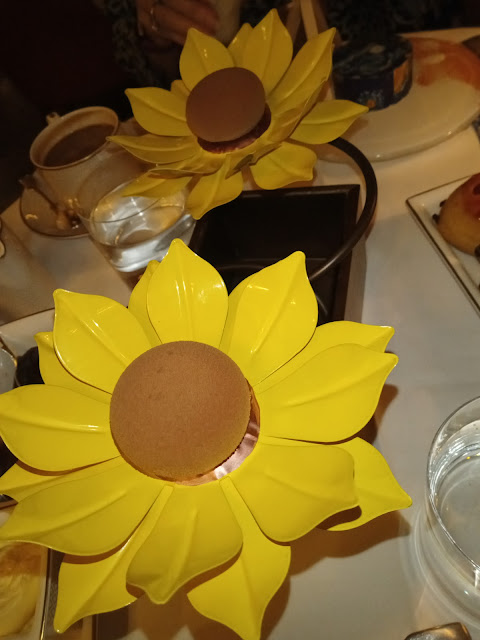 The grand finale to a amazing afternoon tea was the scones. We got a plain one and raisin one each with two different jams and thick clotted cream . The jam was more like jelly with no bits of fruit visible  which was a bit disappointing . The scones were extremely light and fluffy inside which is how I like them to be. 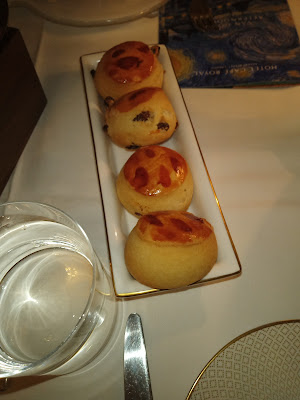 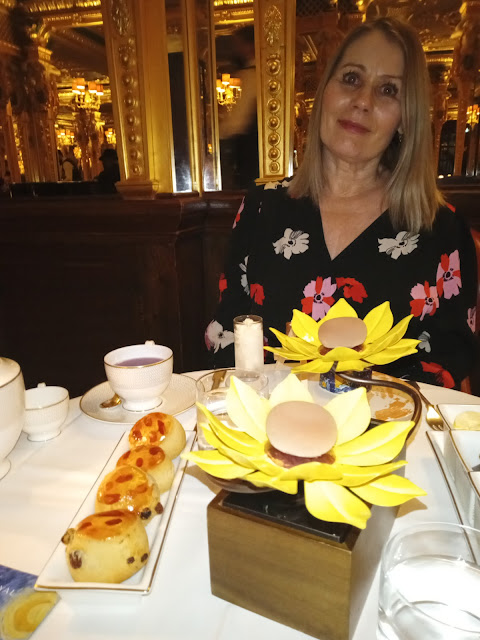 I must mention that when I booked this up online I informed them it was my Mums birthday so halfway through our afternoon tea the pianist started to play Happy Birthday and the waiter brought a plate with two chocolates and candle in to my mum. This was such a nice touch and she keep saying how did they know it was my birthday..... 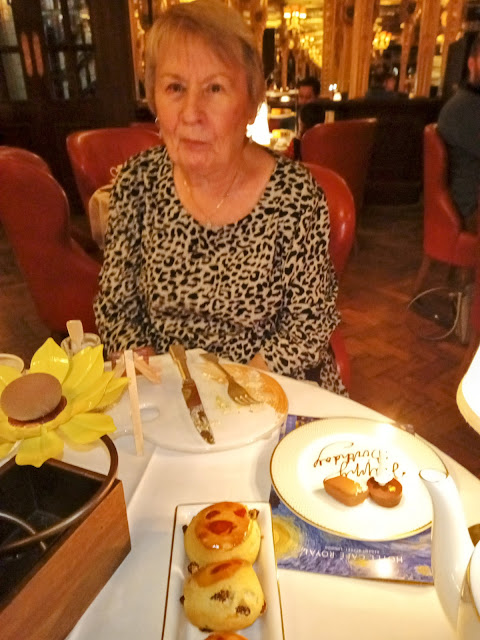 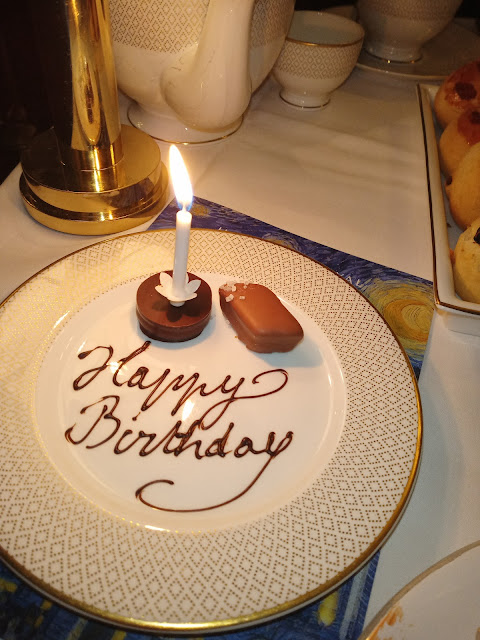 Very nice afternoon tea with an unusual theme. Looking forward to seeing what the theme is next time as may need to go back there 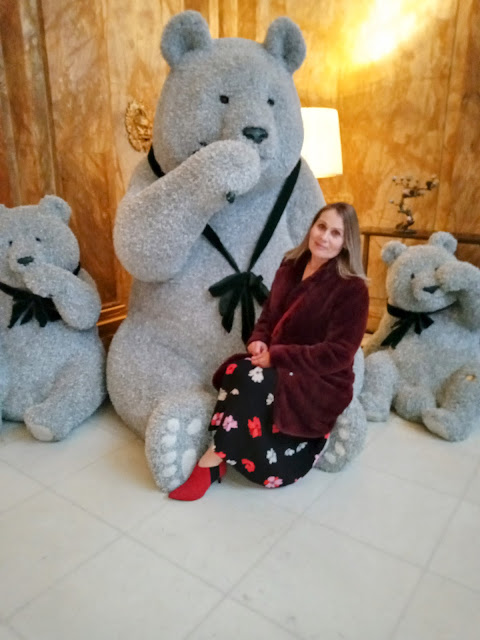 Nearest Station : Piccadilly Circus  - about 5 minute walk
Best bits : The unusual theme and the gold decorated  lounge the tea is served in  plus fresh sandwiches and lovely  cakes.
Worst bits : The jelly like jam if I had to mention something and perhaps the lights could of been a bit brighter
Value for money : It was expensive but nice as a special treat and the food and service was of a high standard
would I go back? : Yes if they did a different theme