My second afternoon tea since lockdown this year was at Montcalm Hotel in Marble Arch. I have been there before with my hubby so this time I took my mum. I had brought two vouchers by mistake from Buyagift for the same venue. I was going to exchange it but as it was only £29 (with a discount code) for a champagne afternoon tea for two I decided to keep it !!!!!!!!!!!!!!!!!   It would cost you more than that at a coffee shop. 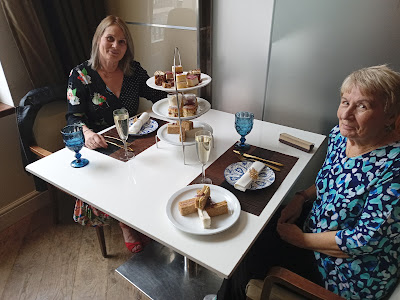 When we arrived I was pleased that it was in the Hankies restaurant rather than the Crescent Lounge where I sat last time I went. It had windows onto the street in Hankies whereas the other room had no windows and was much less comfy looking.  It a small hotel with a minimalist modern feel.

We was given a choice of tables as when we arrived it was not busy. We chose a table for two by the window. About 10 minutes after being seated we was brought a glass of Prosecco and I informed the waiter that we did not eat fish and my mum no mayonnaise. We was never shown a menu which I thought was strange .....maybe its a covid thing at the moment.

The tea stand arrived and my mum had a separate plate of sandwiches with no mayonnaise. The waiter briefly explained the cakes and took our orders for coffee . We both had a cappuccino. 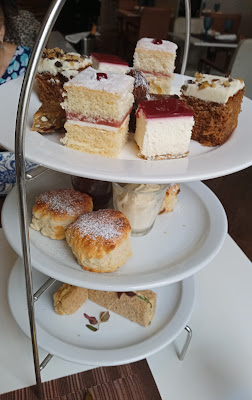 The sandwiches were extremely  fresh with soft white and brown bread . We got six each consisting of a cream cheese one, humus and roasted veg, coronation chicken and plain ham . 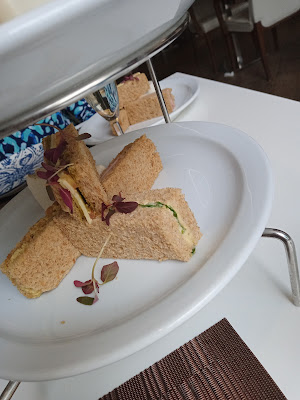 Next we tucked into the scones one fruit one and a plain one each with a pot of jam and clotted cream to share. They were still slightly warm and very nice indeed.  Whist eating these I noticed it was getting  busy and most people were having the afternoon tea. They also put on some background music which was nice.

The top tier of cakes consisted on the following of which we got one each. Cheesecake , Carrot cake, Victoria sponge cake, fruit cake slice and a soft sweet fruit and nut triangle. Our favourite was the carrot cake. My mum commented that is was unusual that there was not a chocolate cake. 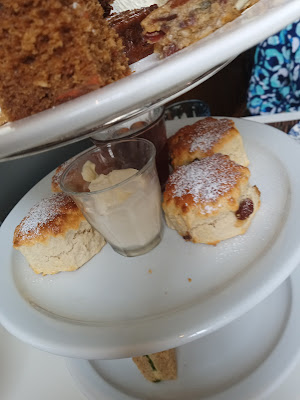 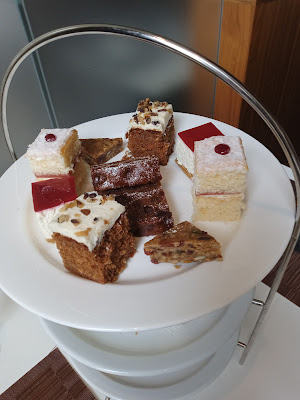 Overall we both enjoyed the food and it was defiantly worth the £29 I had only paid. I think full price including glass of champagne is £38 each which still is reasonable price for a London hotel 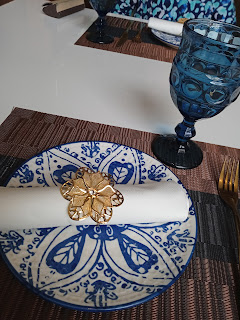 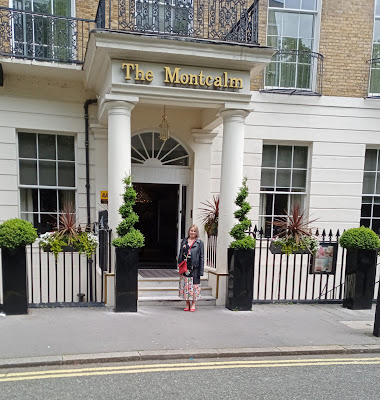 Next afternoon tea is with my hubby so look out for the review on the the Athenaeum Hotel .

Nearest Station  : Marble Arch  underground -  about 5 minute walk    Best bits : Fresh sandwiches and the scones
Worst bits : Décor in the room was rather plain and not very luxurious
Value for money :Yes it was well worth the money we paid
would I go back?  :  Yes maybe but not for a while