Today is my Mums birthday  and i booked the B Bakery Bus afternoon tea for us both. It has been a few weeks since my last afternoon tea  so i was having scone withdrawal symptoms !!!!!!
They do not normally have offers for this afternoon tea but i managed to get a 25% discount code from another website so it only cost £82.50 for 2 of us instead of £110. I booked seats on ther top deck of the bus which i think is more expensive than lower deck. I do think you get a much better view from the top so worth paying the extra. 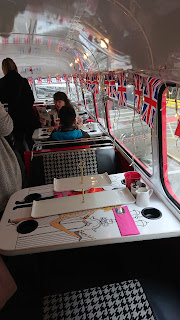 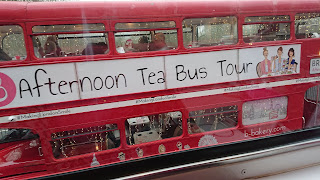 I booked the early bus leaving Victoria coach station at 12 noon.  I was informed by a friend that there are no toilets on the bus so we made sure we went at the station before getting on.
The tables were already laid with a double tier cake stand  in middle of table plus a savory muffin on our plate .They had noted my food request of no fish and no mayonnaise for my mum so we had slightly different sandwiches.  We was offered a hot drink of our choice and given it in a souvenir cup with a lid and hole to drink through. I think this is due to health and safety as the bus was sometimes a bit jerky !!!! My mum tucked into the sandwiches straight away as she was really hungry. She liked the fact that the bread was buttered so they were not dry like some sandwiches  we have been served at other places. 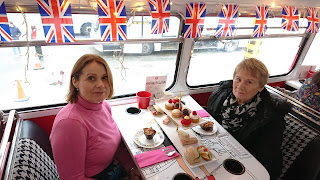 We both liked the savory muffin and then the cheese and ham sandwich . Instead of the salmon we both had a little roll filled with green pesto , mozzarella cheese and baby tomato which i really liked too.
Next we had the cakes , there was 4 each and all of them tasted lovely and fresh. The lemon tart was very lemony and i loved the cream on top of the Sable breton cake ......all YUMMY 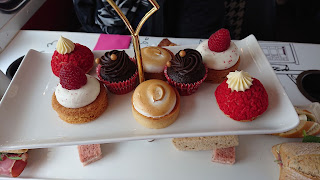 Lastly the young waiter came along and placed a small plain warm scone on our plate and also 2 pots of jam and 2 pots of clotted cream . The scone was OK maybe a bit dry ......i was however more disappointed in the size of it and that we only got one each !!!!! I did ask if i could have another one but they said they did not have any extra ones available.

The whole bus tour latest about an hour and half during which the famous landmarks were pointed out to us . Sometimes it was a bit hard to hear what they were saying over the music that was constantly playing in the background. As we got near to the coach station i noticed that most of the other tables had sandwiches and cakes left on their stands which the 2 young waiters gave them boxes to take them home in. We had nothing left not even a crumb !!!!!!!!!!!! 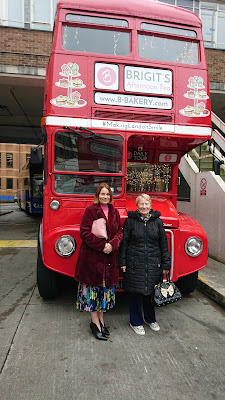 Nearest Station  : Victoria  - Approx 10 minute walk.   Best bits : Savory muffin and nice cakes   Worst bits : Small scone and only 1 each   Value for money : Yes considering it is something a bit different and you also get a tour of London sights
would I go back?  :  Maybe
at January 24, 2020